She gave up her career for her son and our country. Meet Kitty, former teacher and stay-at-home Navy mom.

The decision to stay home with our children can be hard enough, but it's even harder when it seems there is no choice.
Kitty began her career in anthropology, but fell in love with teaching while interviewing residents of rural Alaska for a National Parks program. She taught elementary school for twelve years, but gave that up when she met her husband, a Navy pilot, and they moved from her home state of Washington to Florida.
There, she made plans to start a PhD program in public policy with an emphasis on education and was excited to begin. Those plans came to a halt when she became pregnant with their son, their only child. Kitty found her role as military spouse and mom made full-time work nearly impossible.
I interviewed Kitty four years ago when she was 40 years old and her son was 15 months. Since then, she and her family have moved three times, landing back in Florida again.
Kitty does not regret her decisions, but she plans to return to the workforce in a few years when her husband retires.


This is Kitty’s story, in her own words:

Posted by Twinsmom at 6:09 AM No comments:

Twice she stayed home with her children, and twice she went back to work. Meet Billena, proof that moms can have it both ways.

Many stay-at-home moms worry they will never be able to re-enter the workforce. Billena is proof that fear is invalid. She has returned to the workforce twice after stints at home, once as a massage therapist and, just this month, as a medical assistant.
I came to know Billena of Chelsea, Michigan, nearly six years ago through a forum for women who were pregnant with twins. We have remained friends since. I interviewed Billena four years ago, just after her twin girls were born.
Billena is now thirty-nine years old. Her oldest daughter is fifteen and her twins are six.
Billena stayed home with her oldest daughter until she was in kindergarten. Then she went to school for massage therapy and worked in her field for about three years. While pregnant with the twins, she put her career on hold, returning to school just before they started kindergarten.
She and her husband initially gave up one car to make the decision financially feasible. Her husband is an engineer.

Here is Billena's story, in her own words:

She gave up her badge to stay home with her kids. Meet Jessica Spear.

Children were not on the agenda when Jessica married a fellow police officer. She was passionate about her career and had no plans to slow down.
But then came her son, and Jessica realized she could no longer put her life on the line and risk leaving him motherless.
So she quit.
Soon after, she discovered her son had suffered a stroke in utero and would need intense therapy. She was glad she had made the decision to stay home before his condition could make that decision for her.
I interviewed Jessica, now 40, four years ago when Brendon was her only child. He is seven now and has a two-year-old sister, Adelyn. Before becoming a stay-at-home mom Jessica, who lives in St. Louis, MO, worked seven years police officer.
She was a social worker before that.
Though she earns no salary, Jessica spends her spare time advocating for the youngest stroke victims as a board member of International Alliance for Pediatric Stroke and through her own website, Brendon's Smile. She is also excited to venture back into police work soon through her former employer, teaching courses that help people develop plans of action should active shooters enter public venues such as schools or businesses.

Here is Jessica's story, in her own words: 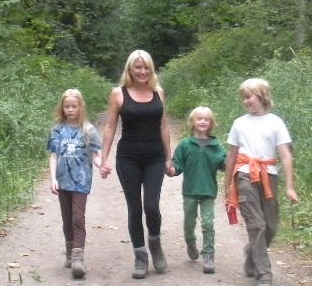 Kathleen is unlike most of the stay-at-home moms I interviewed for this biweekly series, Who Am I Now: Honest Conversations with Stay-at-Home-Moms.
Most struggled with their post-career identities, unaware of the toll the social isolation would take on them.
Kathleen, who lives in a Seattle suburb, worked as a nanny for seven years before she had kids, and then in a private preschool for eight years.
She was accustomed to the lifestyle.
Staying home is important to her, she says. Her parents divorced when she was young and she spent much of her time in the care of sitters.
She didn't want that for her children.
I spoke with Kathleen, 43, five years ago. Her children are now 11, 9 and 7. She is thinking about going to school and getting a job, but she  keeps herself busy now volunteering at school, caring for her household and her kids and keeping the whole family physically active.

Here is Kathleen's story in her words:

My story: the introduction


We didn’t really decide that I would stay home with our children. It just kind of happened.
I had always believed that working mothers set a good example for their children, especially their daughters. I couldn’t understand or imagine why anyone would want to stay home.
Until I held Riley in my arms.
We had moved to Arizona less than a year earlier.
Most people we knew were either married and childless, or single. I had been working on contract as a technical writer since the move with the intention of looking for full-time work as a journalist when Riley was four months old.
But the day care centers made me cry.
The private care providers made me cry.
The thought of someone else caring for our infant son 50 or so hours a week while I established myself at a new newspaper and my husband traveled about the country raising money for his start-up employer, made me cry.
I couldn’t do it.
Neither could my husband.
So I began my new career as a stay-at-home mom. With it came a mass of changes and confusion. I no longer had any idea how to present myself to others.
Was I still a writer?
Could I still call myself a writer?
I could handle the debt. I could deal with shorter runs and few extra pounds. I kept my old friends and started making new ones. I even managed to shower every day and forgave myself when I went too long without a hair cut.
But I didn’t know what to do about my identity.
Over play dates, coffee and grocery store rendezvous, I soon learned that I wasn’t alone with my feelings. Many women face crisis when they make that decision to stay home with their children.
Some like me, struggle with their identities, keeping a foot in their career doors with small projects here and there. Others fret day and night over making ends meet on only one income. Many face depression over their weight, their shape or their social lives.
We all struggle in some way, yet no one I talked to expressed regret over the decision to give up a career, or a chance to have a career. And, in general, they were reluctant to complain. They were, in their minds, the fortunate ones.
They could stay home with their children.
They considered it a luxury no matter what they had to make do without. Most had at least a friend or two who worked full time, not because she wanted to, but because she felt she had no choice.
They were overwhelmingly grateful.
What they would have liked, however, was to know what to expect, to know that they were not alone in their feelings and experiences, to know that bouts of self-doubt and even depression were normal. They would have liked to have known from the beginning that as the years ticked by and their children grew, they would see more and more clearly the rewards of their decisions and that underneath the dirty dishes, the piles of laundry and the piled-up backpacks and homework, the women they had known before kids was still there:
Susan could still dance if she wanted to.
Kathleen was still beautiful.
Betsy’s boss would take her back in an instant if she changed her mind.
I learned that I didn’t need to work at a newspaper to satisfy my intellectual and creative needs. I could do it during naps or at night or with the help of a sitter now and then.
My creativity did not suffer from my time at home. Rather I believe it matured with age and the experience of motherhood. My subjects changed and so did my priorities.
Suddenly this book and the need to help other stay-at-home moms realize the commonalities of their experiences became important.
I would like to say that the women I interviewed agreed to speak with me because of an allegiance to those who will come after them—that they were moved by the need to ease the transition for other stay-at-home moms. And I’m sure that was a big part of their motivation.
But their words, their inflections and their passions told me something else, something even more surprising and even more vital. What came through was pride—pride in their decisions, pride in their struggles, pride in what they consider their greatest accomplishments: the development of their children.
Posted by Twinsmom at 3:43 PM No comments:

Five years ago, I had an idea.
A great idea, according to several agents and publishers.
Who Am I Now: Honest Conversations with Stay-at-Home Moms was supposed to be a collection of interviews with mothers of all ages from all over the country who discussed, entirely in their own words, the sociological, the financial, the psychological and the physical impacts of their decisions to remain home with their children.
No condescension from the experts, no supermoms held up as role models: only candid interviews with real women of all ages.
More than a dozen women, strangers at first, gave selflessly of their time, their hearts and their souls to make this book happen.
Their motivation was not money.
There were no promises of compensation.
They spoke to me because they wanted to help.
They were no longer strangers by the time we were through and I am forever grateful that I had the opportunity to know them.
I couldn't wait to share their experiences, their raw honesty, their wisdom with the world.
But then came reality.
Pull a parenting book off the shelf.
Chances are the author is a celebrity of some sort -- a talk show host, an already well-known writer, an actor, a nationally or internationally renown doctor. The publishers who were interested in Who Am I Now? wanted that same status from me.
They wanted me to freelance for national parenting magazines, speak at conferences, blog on parenting sites -- do anything I could to become a "parenting expert" before they would consider publication.
But I am not an expert and I never will be.
I am a stay-at-home mother of four who was once a journalist and is now writing fiction. I am a woman who struggled with staying home, who took comfort in the voices of others and who wanted share that comfort with others who were struggling. I was to be the compiler of Who Am I Now?, not the writer, not the expert.
It has pained me to think that those women wasted their time, their energy and their honesty.
So I had another idea.
Every two weeks for the next several months, I will publish one of those interviews on this blog.
I will promote the blog wherever I can and I will count on the interviewees to share as well.
Together, we'll get the word out. We'll reach those moms who need us, those mothers who are struggling with their new roles and with the identities they left behind, who are searching, sometimes through eyes swollen with tears, for the answer to that question: Who Am I Now?
Posted by Twinsmom at 10:02 AM No comments: